Lessons from Rio: Five Things the Aquatics Industry Can Learn from the Olympics 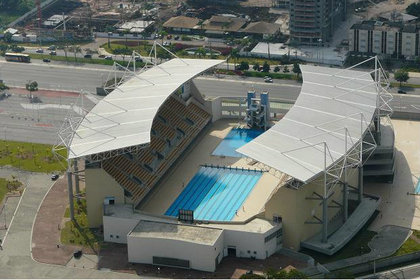 For better or worse, the Summer Olympics in Rio had the whole world talking about aquatics.

Certainly, the quadrennial sporting event offered a number of teachable moments for the industry. But it wasn’t all bad. There were some truly inspirational highlights that defined competitive swimming as one of the most thrilling spectator sports of them all.

Here, aquatics pros weigh in on the good, the bad and the ugly green pool at the center of the global spectacle.

For a moment, the dive pool looked like a giant tank of Mountain Dew.

The lesson: Though embarrassing, to say the least, the snafu should serve as a sobering reminder that all aquatics facilities should be operated by a designated, knowledgeable pool pro – preferably a certified one. If a mishap such as depleted chemicals can happen under the (supposedly) watchful eye of FINA, then it’s much more likely that malfunctions will occur when a pool is managed by a generalist – which is the case at many high school pools.

“Many times schools will say, ‘We’ll just have our custodial staff do it.’ No, you need specialized training,” cautioned Juliene Hefter, executive director of the Association of Aquatic Professionals in West Bend, Wisc. “Everyone thinks it’s easy to run and operate a swimming pool when, in fact, it’s very difficult.”

If you spent any time on social media during the Games, it’s likely that you saw the competition pool lifeguard who looked positively bored out of her mind. Many a meme was made out of her disinterested expression, and there was plenty of jokey commentary along the lines of, “What’s a lifeguard doing at an Olympic event anyway?”

Lesson 1: Her demeanor didn’t help dispel the image of lifeguards being inattentive slackers. “We’d rather have seen her being alert, changing her position and doing proactive scans and bottom scans,” said George Deines, a Dallas-based project manager for Counsilman-Hunsaker. That's why lifeguards need to keep in mind that, while you're watching swimmers, people are watching you. In this Snapchat-happy culture, you too could go viral for the wrong reasons.

Lesson 2: No one is too good to need a lifeguard. “Even the best swimmers can go into cardiac arrest,” Deines said. “Who’s going to save them?”

About those itty bitty diving trunks…

Oddly, apparel was a hot topic.

That’s mainly because there were moments, gleefully published on Twitter, when male divers appeared nude on TV – their tiny attire obscured by informational graphics during live broadcasts. Whether or not divers need to consider a more modest choice of apparel is a topic for another day.

But the subject of what is appropriate to wear in a pool is one the industry is currently debating. Several cities in France are currently waging a war against the burkini, and there are some facilities in the U.S. that are trying to be more accommodating to women of Islamic faith. Those efforts have not been without controversy.

Hefter brings this up because one of the most poignant moments of these Olympic Games happened not in a swimming pool, but on a volleyball court. A match between Egypt’s hijab-wearing women’s team and Australia’s (comparatively) scantily clad women’s team speaks to the power of sport as the great cultural unifier.

The lesson: Aquatics should be more inclusive. So long as one’s attire isn’t a safety risk, “why shouldn’t we make swimming as readily available as possible?” Hefter asks. “That’s our goal in the aquatics industry.”

Speaking of diversity, the 20-year-old is the first African American woman to win Olympic gold in swimming. This historic achievement was celebrated by AI Power Person, Wanda Butts, who made it her mission to teach minority children how to swim through her foundation The Josh Project.

Nate Traylor is a senior editor at Pool & Spa News and Aquatics International.