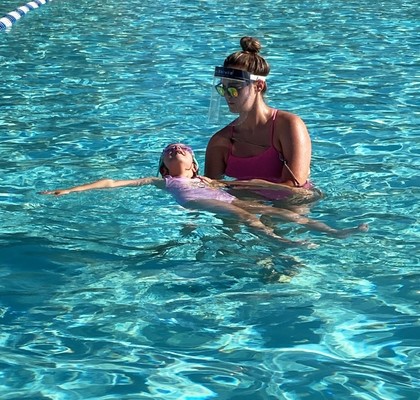 This year, COVID-19 has required aquatics managers to use their creative muscles in ways they never had to before.

While we originally hoped the pandemic would be contained in 2020, it appears we will be living with the coronavirus well into 2021, probably requiring aquatics facilities to continue employing many of the procedures that were developed, and draw from the lessons learned.

Here, aquatics managers who were able to operate their facilities this year share some of their procedures and the lessons they’ll carry into 2021.

• Don’t rely solely on guidelines from the government and other sources. Exceed them if necessary.

• Be persistent with local government.

• Be prepared to change every day.

Michael and his team reopened the second week of June and were able to provide some of the more logistically difficult services: open swim, lessons for children and lifeguard training.

They were able to do this after he presented the local government with an opening plan that addressed many of the city’s concerns, which had been made apparent on restrictions it had placed on other industries. The document could then be used by the government to draft its own guidelines.

And they were able to maintain a net-neutral budget, as required.

For open swim, the team kept the capacity significantly lower than the government would have allowed. At the 50% capacity allowed, they could have accommodated 100 visitors. However, that didn’t feel manageable to Michael. Even 50 felt like too many. It seemed to work on paper — literally, as Michael drew out a grid of the pool and could see a scenario where this worked. But they didn’t feel it would allow for proper social distancing in the seven-lane pool. It seemed the capacity and social distancing requirement conflicted.

“We thought it would be completely manageable if we started out small,” he says.

Instead, they landed on 35 – five family members per lane. This also was the minimum needed to cover their costs.

Fortunately, visitors were cooperative and vigilant about their own safety. “Everybody was responsible, and their families stayed nuclear and together, so there was really little management needed from a lifeguarding perspective,” Michael says.

Of course, some days were busier and more profitable than others. This meant the team had to be ready to make daily adjustments to keep costs in line.

“Our minimum capacities or thresholds had to be met, or I had to cancel,” he says. “So the goal of staying net neutral required a ton of management on a daily basis, where I had to make decisions: Should I run this program? Should I cancel this? Can I cover this? Is there a way I can interject myself to cover some of the staff time? How can I market this better?”

He expects this kind of diligence to continue through the fiscal year, and potentially into 2021.

• Communicate from one source.

• Use spaces in new ways if necessary.

• Enjoy the benefits of reserving space.

Because the conditions of the pandemic and their management change daily, so must procedures. While masks may not be required one day, things may tighten the next. So this has not been a time for messaging to become distorted as it travels through the organization. Everybody must be completely clear on policy specifics and intent.

For this reason, Foote and his team have streamlined communication so it travels directly from the administrative office to each affected staffer, rather than being relayed through the management team to their various charges.

“We have a large staff — just over 300,” Foote says. “We definitely had to put into place some communication procedures, and we increased the amount of staff meetings we had.”

Where the team used to gather about once every week or so, they now meet twice each week, so information and input can flow more directly.

They also needed to make more room for social distancing among lifeguards. Their office was too small for safety, so the team converted a class space into the lifeguard office to provide sufficient space between individuals.

Like many facilities across the country, the City of Chandler required visitors to reserve times for open swim or lap swimming, similar to how they would reserve for a class pre-COVID. This had an unexpected benefit for the city in helping to ensure it serves city residents first. Going forward, Foote expects to continue giving Chandler residents the ability to book times in advance. Then, non-Chandler residents can purchase unbooked slots on-site in real time.

• Use reservation systems in new ways.

• Use clean session times, where everybody enters and leaves at once.

To control lap swimming, this team began using its ACTIVE Net system in a new way — to book lanes for lap swimming in advance. The system basically treated it like an unpaid class. They would only book a week at a time. “If we let it open all the time, then somebody could book all the available slots, which we didn’t want to happen,” Solomon says.

At first, the County only allowed one swimmer for every other lane, to allow for social distancing. Then one swimmer was allowed per lane. When the hour session is over, the team spends about a half hour sanitizing in preparation for the next session.

This not only provides social distancing between lap swimmers during a given session, Solomon says. “It allowed the patrons who were here during, say, the 9:00 hour to vacate the facility before the new group came in,” he says. “So we could stop the pinch point at the entrance gates, where people were waiting for one person to leave, then one person to come in.”